Everyone has dreams, goals, ideals, visions. But do you know what separates the ones that achieve them from those that do not? Discipline. Seriously, it’s not as easy as it is to find a reason within you to endure all of the rough patches and close yourself off from everything going on outside just so you can focus on your work. But, it’s necessary, and I’m here to tell you that it’s possible. But you can’t do it the way you are. No offense, but think of it as art. In the beginning, it’s just a big pile of junk until it gets reshaped into something extraordinary. This is what we will be doing to you, starting right now.

Contents hide
1. Pinpoint your Weaknesses
2. Create a Clear Strategy
3. Break your Strategy Down to Short and Long term Goals
4. Start Small, Think Big
5. Get Rid of all the Temptations and Negativity
6. Failure is your Teacher, not the Monster Under your Bed.
7. 40 Inspirational Quotes on Self-Discipline
8. Read Also

The first step to solving a problem is identifying it. There is nobody that knows the reason you haven’t succeeded yet, better than you do. You have to be honest to yourself, though. If you know what aspects of your character or lifestyle are holding you back from being to where you want to be, now you know what to focus on when performing the next steps of this list. Also, one more thing. Don’t go around blaming someone else for your failure, or rather, lack of success. This is one of the most valuable tips I have to give to you, so you better take it to heart. Nobody is to blame for your mishaps but yourself, you are your worst enemy, and your brain is the only thing to overcome if you want to succeed. 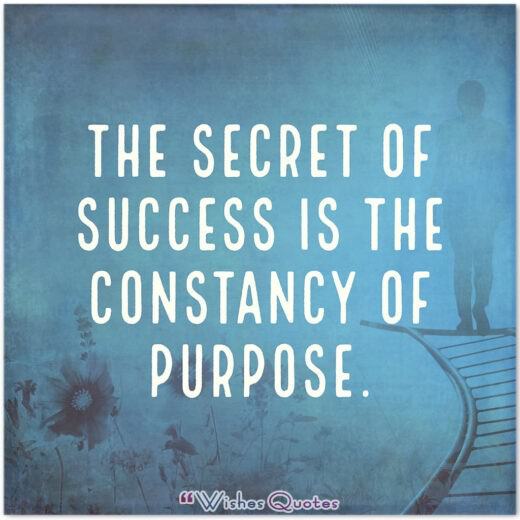 So, now you know what to focus on. You know your weaknesses. Hopefully, by identifying your weaknesses, you also found your strengths, which is good because you will need them. I’m not going to create you a “Multi-step plan to success” because, honestly, most of these don’t work. Every person is different with a totally different goal in mind. So, instead, I’m going to make you create your own plan. You know what is in your best interest, and you also know best what this is that you want. Now what you have to do, is answer the following questions: “What it is that I want,” “How will I do it,” “What do I need to do it,” “When will I do it/By when will I have done it.”  Having a clear plan set in your mind not only makes the process easier, but it gives you the inner strength to move on, knowing that you are on schedule the whole time, always having the next step planned out, giving you a sense of progress and fulfillment.

Break your Strategy Down to Short and Long term Goals

Now don’t go ahead spouting, “I want to be the president by tomorrow,” ok? A plan is never that easy. If you want the best chances possible, you have to analyze your plan and break it down into smaller, easier, more achievable steps. This way, you yet again gain a sense of progress and fulfillment, and it’s easier to climb a staircase one step at a time than attempting to do the whole thing in one go. So, make a time table; here I’ll make an example. Let’s say that your plan consists of 6 steps, could be 5 tiers, could be 5 different weight goals or any kind of benchmark, and you want to do it in a year. The most logical thing would be to provide 2 months for each step, so you have a scheduled plan, but that isn’t always the correct case. If I have one tip to give you, it is to assess the situation. One step might be more demanding than the other, so give it more time. It’s like studying for a test, not all chapters are equally difficult, so you divide your time accordingly.

Once you’ve completely broken down your plan and are incomplete understanding what you should be doing, then one piece of advice I have to give you is this. Do the easy things first. Why? You may ask. Because you need to start with a win to get your confidence up. If you get to the straightest part right from the get-go and you fail, then your morale is going to sink through the floor. Plus, getting the easy stuff done first will get you into the mood necessary to tackle the most challenging parts later.

Get Rid of all the Temptations and Negativity

We all have things holding us back. But, what winners learn to do, is removing those things from their lives. If it’s a friend that is a really bad influence for you and your goals, then limit that interaction to the bare minimum. If it’s someone that doesn’t want you to succeed and keeps showing it, then remove him entirely from your life. If it’s your temptations, then find ways to limit them. Ask for help from your loved ones, or make yourself a “reward program” where you only get to fall to temptations when you succeed in a task from your plan to success. This way, you will have a clear head with no distractions on your way to success, thus increasing your willpower because nothing is holding you down.

Failure is your Teacher, not the Monster Under your Bed.

This is probably a tip that you will need a lot while going into the trip to success. I am not going to lie to you; failure is inevitable. You will experience many difficulties along the line, and sometimes you might not even make it. But nobody said that you have to do everything on the first try, that’s impossible. Also, nothing gets your willpower down more than a hard cold dose of failure. But, you don’t have to let it affect you. If you genuinely want to have the willpower to succeed, choose to see your mistakes are lessons that will help you become a better person. That way, there is no way to fail.