50 Perseverance Quotes – Never Giving Up is the Secret to Success.

Having the perseverance to keep fighting no matter the situation is essential in maintaining the willpower necessary to achieve any goal. But why? You may ask. You see, the bigger your dream is, the harder the path will be. Changing your life around isn’t easy. It’s a very steep and narrow road on the side of a very tall mountain. You have nobody to help you for a big part of the time, and there will be difficulties that you must overcome if you want to reach the top. Like H. Jackson Brown said: “In the confrontation between the stream and the rock, the stream always wins- not through strength but by perseverance.” So, here are some small changes you can implement in your life to persevere in any situation!

Contents hide
1. Get a Clear View of Your Goal
2. Always Remind Yourself That You Can Do It
3. Turn Failure Into a Driving Force to Become Better
4. If It Doesn’t Work, Try It Again, Try It Differently
5. Try to Find the Bright Side in Things
6. Learn to Place the Word “Yet” In The End Of Every Negative Thing About You
7. The Best Perseverance Quotes and Sayings
8. Read Also

Get a Clear View of Your Goal

If you want to persevere, your first step should be to know what you are persevering for. Setting a clear structure for your dreams, layered into all different kinds of actions and approaches you can take, gives you a sense of productivity, security, and progression, which in turn gives you the motivation to keep persevering. So, get your needs and abilities in check and answer the following questions. “What is it that I want to do” “What do I need to do it” “How am I going to do it” “When will I do it/By when will I have done it.” Then you’re set. Another great way to keep your goals visible is by literally having them in front of you the entire day. Get something to remind you of your goals and aspirations and stick it in your office, so you are constantly reminded of what you’ve set out to do. 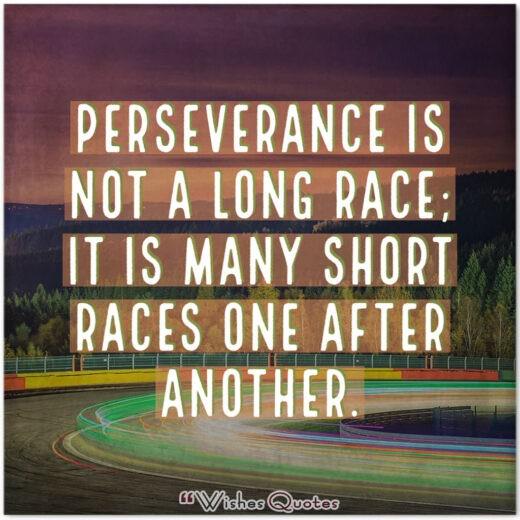 Always Remind Yourself That You Can Do It

There will be times where you think you can’t do it. You will undoubtedly question not only yourself but your goal in its entirety. If you quit then, then everything was for nothing. So, keep in mind that you are doing this for yourself, above everything else. If you’re strong enough to have come this far, then you are strong enough to go beyond the finishing line. The only time when you are really done for is the moment you decide you’ve lost. Until then, you have to convince yourself there is still hope; that is the essence of persevering. 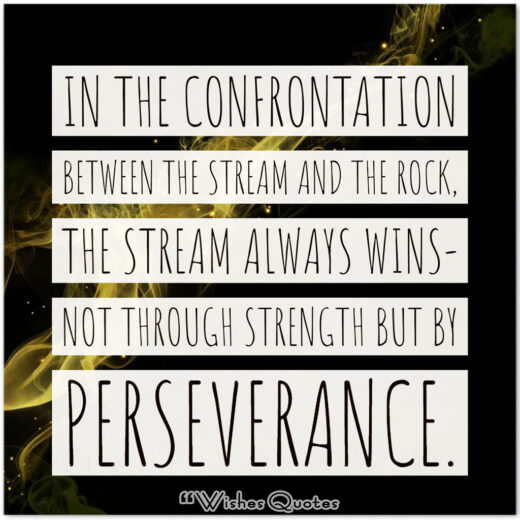 Turn Failure Into a Driving Force to Become Better

You cannot expect everything to run smoothly. There will be times where things will not go according to plan. Where you are scared, afraid, thinking you should quit. But these are the moments that make you stronger. You see, plenty of people dare to take the first step, but not many dare to stop walking. Pain is your friend; fear is your teacher. Because fear is what teaches you what your weaknesses are. After that, it’s up to you to take that lesson to be heard and become stronger. But if you choose to quit, then you shouldn’t have started in the first place. If it doesn’t come bursting out of you, if you don’t want to do it from the bottom of your heart to the point where every single cell in your body is aching for you to move forward, then you’re not ready. If you find the courage to tame your pain and make it your friend, then you will have the courage to persevere.

If It Doesn’t Work, Try It Again, Try It Differently

You can’t expect everything to work out perfectly. There will be times where you have to branch off the beaten path. You don’t have to be scared. The only thing you have to do is just try again and keep on trying until you succeed. If calculus has taught us one thing, there are multiple solutions to a single problem. So, instead of giving up after the first failure, think more significantly; I’m sure that you will find plenty of other ways to solve your problems if you look hard enough.

Try to Find the Bright Side in Things

Optimism is a core factor of perseverance. As I’ve said countless times, there will be difficulties in your path to achieving your dreams. So, it’s essential to look on the bright side of things and make the best out of every situation. So you lost your job? Good, you hated that place anyway, and you get reimbursement so you can find something better. Your partner dumped you? They weren’t good enough for you anyway, since they couldn’t see your good qualities. It’s little stuff like that you have to implement in your mindset to not let every setback take you down. I know that optimism is about seeing the glass half full, but I want you to go even more significant and see the glass as one ready to be filled!

It’s really a shame when people are not even trying to accomplish their goals because they think they can’t do it. Everyone has the potential for greatness, but not everyone has the guts to admit it. You see people left and right saying things like “I’m not good at X” or “I’m not creative/experienced enough” or even worse, “I don’t have the resources/time to do it.” Now try adding the word “yet” at the end of each sentence. “I’m not good enough yet,” “I’m not experienced yet.” Do you understand that just saying a simple word every time you try to say something terrible about yourself gives you such a positive and optimistic vibe? It’s really that simple. Because you see, most of the time, the only problem is your attitude about the situation. Fix that, and you’ve fixed the problem itself in no time.

The Best Perseverance Quotes and Sayings