Before you Quit, Try

“Before you Quit, Try” Is a quote by William Arthur Wand, one with an everlasting meaning, traversing throughout the ages. This quote gives me a reason to ask: How many times have you quit something, before even trying? How many times have you said: “Nah, this is not for me” or ” I don’t think I can do this/have something to gain from this”, and give up on something you love, just because you were scared, or bored. Maybe it was that guitar lesson you had in middle school or that cool project you started out with a friend in college, or it was that relationship you walked out from after the first few big arguments. Countless things that could have changed your life forever, and you shut the door right in their face. Right about now, you’ve probably realized what opportunity I’m talking about. Maybe you’re thinking you had the right reasons, or you really had nothing to gain from. Maybe your teacher told you that you really didn’t have the skills to become a professional guitar player, or you got bored of failing the entrance exam for that college you’ve been dying to go, or maybe you weren’t seeing any success on the project you started out with that friend, so you chickened out. That’s right, knowing when to quit is manly, but you chickened out. You were scared of failure, scared of disappointment, scared of bad feedback, so you stop, before even trying. So, next time, before you hurry up and drop the “I quit” bomb, try asking yourself some questions beforehand.

Contents hide
1. Questions to Ask Yourself Before you Quit
2. Things to Consider Before Giving Up
3. Read Also

Questions to Ask Yourself Before you Quit

Things to Consider Before Giving Up

To summarize all I’ve said so far, quitting is not something you do that easily, and it isn’t something you should be doing that easily. You should never quit if you feel there is even the slightest glimmer of hope left. If there isn’t, then at least from that experience, you’ve learned how and when to quit, but if there is, you should grab it with both hands, and hold tight until you make your dream happen. So please, just play one more song, write one more paragraph, cook one last meal, sing one last song, craft something one last time, go to that one last training, run that last distance, and if you do. You still feel lost, then feel free to quit, but for you to be reading this, I have a feeling that inside of you, there is still that small thread of hope left, all you have to do is reach out and grab it. 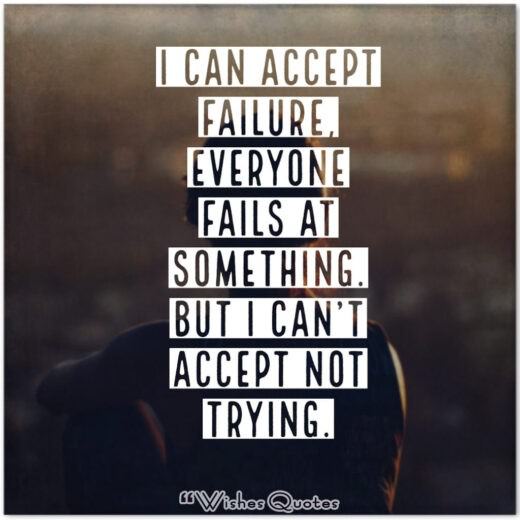 I can accept failure, everyone fails at something. But I can’t accept not trying.